Calvin Keys with the Brian Ho B3 Trio 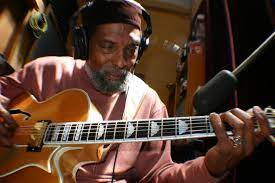 Jazz guitarist Calvin Keys is a legend among soul-jazz fans and known for his lean, muscular single-string solo style. In 1971, he signed with Black Jazz label, released a pair of albums and played in the Ray Charles Orchestra. Keys’ unique phrasing and his ability to balance sophisticated jazz harmonics with tough R&B and soul grooves were showcased nightly in the Charles band. By 1975, Keys had relocated to the San Francisco Bay Area, where he became — and remains — an avid participant in its jazz community.

He remains active on the jazz scene today with frequent appearances in San Francisco Bay area venues. He is a member and teacher of the Oakland Public Conservatory (OPC).He also mentors upcoming musicians; gives private lessons; and is a frequent teacher at Jazz Camp west.