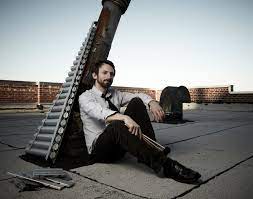 Chris Dingman is a vibraphonist and composer known for his distinctive approach to the instrument: sonically rich and conceptually expansive, bringing listeners on a journey to a beautiful, transcendent place. Dingman has done significant work with legendary artists Herbie Hancock and Wayne Shorter as well as next generation visionaries such as Jen Shyu, Ambrose Akinmusire, Steve Lehman, and many others, performing around the world including India, Vietnam, and extensively in Europe and North America. Hailed by the New York Times as a “dazzling” soloist and a composer with a “fondness for airtight logic and burnished lyricism,” the fluidity of his musical approach has earned him praise as “an extremely gifted composer, bandleader, and recording artist.” (Jon Weber, NPR).

While growing up in San Jose, California, Dingman began piano and percussion studies at an early age. He went on to attend Wesleyan University, where he received his B.A. with honors in music. While at Wesleyan, he studied intensively with vibraphonist Jay Hoggard, drummer Pheeroan AkLaff, composer/multi-instrumentalist Anthony Braxton, and mridangist David Nelson. During this time, he was heavily involved in the study of many of the world’s musical cultures, including South Indian, West African, Korean, Afro-Cuban, and Brazilian music. In the summer of 2000, his studies brought him to Kerala, India to delve further into mridangam and South Indian classical music.

In 2011, Dingman released his debut album, Waking Dreams to widespread critical acclaim. The album was called “gorgeous” (Time Out NY), “brilliant” (All About Jazz), and “luminous” (NY Times). Stereophile called it “a very big, pleasant surprise” and the Los Angeles Times commended: “rich and full of unexpected twists but never less than approachable, Waking Dreams casts an atmospheric spell true to its name.”

Dingman’s album-length work The Subliminal and the Sublime, was commercially released by Inner Arts Initiative in June of 2015. The Subliminal and the Sublime is a 62-minute work continuously unfolding in five movements. Blending jazz, ambient electronica, and minimalism through vivid textures and sweeping narratives, Dingman explores subliminal layers of patterns, detail, and depth inspired by the natural world.

Ever growing and evolving, Dingman’s latest work is focused on music for solo vibraphone as well as his trio. His latest album with the trio, Embrace, was awarded the prestigious New Music USA project grant. The album features Linda May Han Oh on bass and Tim Keiper (David Byrne, Vieux Farka Toure) on drums, and is produced by Keith Witty (Thiefs, Somi).

Meanwhile, also in 2020 he released the album Peace, a five-hour album recorded as it was performed for Chris’s father during his time in hospice care. This extended album consists of 5 hours of Dingman’s original solo vibraphone music. It’s an immersive listening experience that many have described as transportive, meditative, and deeply healing. Peace was selected as the album of the year by music critic Rick Anderson for the CD HotList and Scholarly Kitchen blogs, and Dingman was profiled in AMNY and The Villager newspaper. in a feature about the music and his experience creating it. In August 2020, Dingman presented a five day online residency for the Reimagine Festival, performing exploratory hour-long solo sets.

In recognition of his recent work, Dingman was among the five vibraphonists nominated for “Mallet Instrumentalist of the Year” in the 2021 Jazz Journalists Association Awards, and among the four vibraphonists recognized in the 2020 Jazz Times Critics Poll (released February 2021). From Fall 2020 to the present, Dingman has been releasing one new solo piece per week for subscribers to his series on Bandcamp, recording and releasing over 40 tracks and counting.