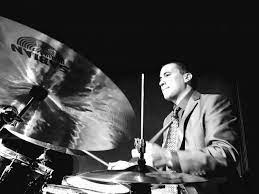 “David Potter believes in the balance needed to play music. He expresses  musicality through great rhythm, swing, and attention to detail. He is  one of the most talented young drummers on the scene today.”  Marcus  Roberts

A native of North Carolina, Dave began playing drum set in high school and starting performing with his elders in the RDU area at the age of 16. Following his graduation from Florida State University, he was  chosen from a national pool of applicants to be a member of the Louis  Armstrong Quintet at the University of New Orleans. Unfortunately, the  tragedy of hurricane Katrina temporarily ended his hopes for a career in  Louisiana. Soon after, Dave was awarded a full scholarship to the  prestigious Julliard Jazz Program in New York City. However, after  several days of intense meditation he declined the offer and returned to  Florida State University, where he received his Master’s Degree after  further collaboration with his mentor Marcus Roberts. In 2010, Potter  was featured in a novel entitled “The New Face of Jazz” about the  younger generation of Jazz musicians making an impact in the current  scene. Dave is now located in Atlanta where he maintains a busy teaching  and performing schedule while also touring the globe as a member of The  Jason Marsalis Vibes Quartet as well as his new project as a leader,  Retro Groove.