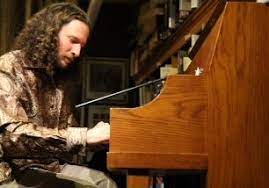 Grant Levin is a jazz pianist and composer based in San Francisco. Born in San Diego, California, he began studying the piano at age 5. He attended the University of Nevada, Reno, where he received a Bachelor of Music degree. After graduation, he joined the faculty of the music department at California State University, Chico, where he taught for 3 years.

Levin has worked with a wide range of artists such as: Little Anthony and the Imperials, John Santos, Akira Tana, Dayna Stephens, Greg Abate, and many others.

If you are familiar with the jazz composition, “Take the A Train,” then you know something about not only Duke Ellington, but also Billy “Sweet Pea” Strayhorn, its composer. Strayhorn joined Ellington’s band in 1939, at the age of twenty four. Ellington liked what he saw in Billy and took this shy, talented pianist under his wings. Neither one was sure what Strayhorn’s function in the band would be, but their musical talents had attracted each other. By the end of the year Strayhorn had become essential to the Duke Ellington Band; arranging, composing, sitting-in at the piano. Billy made a rapid and almost complete assimilation of Ellington’s style and technique. It was difficult to discern where one’s style ended and the other’s began. The results of the Ellington-Strayhorn collaboration brought much joy to the jazz world.