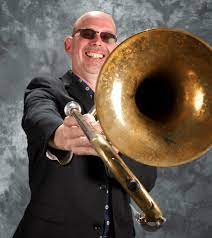 Jamie Dubberly is a multitalented trombonist, composer, and bandleader originally from coastal Georgia. He has been in northern California since 2003, when he moved from the New York City metro area. Jamie primarily has been a part of the burgeoning bay area Latin and jazz scenes since he arrived in 2003, and is currently a member of the following prominent ensembles: Avance, Pacific Mambo Orchestra, Realistic Orchestra, Jazz Mafia Symphony, Montuno Swing,  Brian Andres’ Afro Cuban Jazz Cartel, and  Orquesta Dharma (leader). He also works frequently with noted bay area bands such as La Fuerza Gigante,  Mazacote (Louie Romero) and many others.