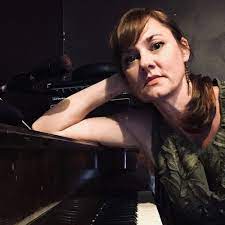 Katy Stephan is a pianist, vocalist, and composer. She has composed and performed live original music for theatre (Porchlight Theatre, Word For Word, Upon These Boards, Azeotrope Theatre), dance (Project Agora, Copious Dance, Theatre, Counterpointe, and Requisite Dance), as well as burlesque and circus.

A collection of original songs that Katy recorded at home for National Solo Album Month was named one of the San Francisco Chronicle’s “Best Local Releases” of that year; and for three straight years she wrote, recorded and posted a new original song every week on her website.

She has performed in Germany, France, Italy, Brazil, Japan, Cyprus, the U.K. and the U.S. with various groups and projects. Stephan has been a soloist with the Oakland East Bay Symphony for their concert versions of Candide, Follies and Leonard Bernstein’s Mass, and appeared with the Pacific Mozart Ensemble as a soloist and chorus member on the Grammy- nominated recording of Mass with Kent Nagano and the Deutsche Symphonie. Her voice can be heard in several motion picture soundtracks, a TV sitcom theme, and in educational toys by Leapfrog and Fisher Price. Her original music is available on iTunes and at bandcamp.com.

The Countess Katya Smirnoff-Skyy has enthralled Bay area audiences for years with her unique blend of opera pop and booze. With a career spanning …a very, very long time…..Katya claims to have invented Popera, romanced William Shatner, and lived next to John Lennon at the Dakota during her stint in New York City during the 1970’s. Once Eastern Europe’s greatest Mezzo-Soprano…understudy, the Countess now spends her days beautifying the masses at Macy’s Department store, as everyone’s favorite Chanel counter lady. She spends her evenings crooning and drinking her away through the finer theaters, bars and bath houses of America.