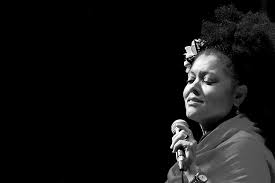 Awarded “Most Influential African American in the Bay Area” in 2005 and “Best Jazz Group” in 2013, vocalist Dr. Kim Nalley is already being called “legendary” and “San Francisco institution. A true Renaissance woman, Kim Nalley has been a featured writer for JazzWest and SF Chronicle’s City Brights, shortlisted for a Grammy nomination, a produced playwright, an avid Lindy Hop & blues dancer. and the former jazz club owner of Jazz at Pearl’s. She earned her Ph.D. in history at UC Berkeley and is a published scholar.

Vocally, she has pipes to burn packing a 3 1/2 octave range that can go from operatic to gritty blues on a dime, projection that can whisper a ballad yet is capable of filling a room with no microphone, and the ability to scat blistering solos without ever losing the crowd’s interest or the intense swing. She has been compared to all the greats, but in the end, it’s Kim Nalley and no one else – an unforced instrument with clarity and jazzy musicality, effortlessly delivered, and a sense of humor to boot.