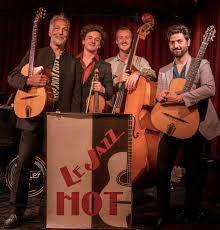 Django Reinhardt is rightly hailed as one of the greatest guitar players that ever lived, but many people praising his accomplishments as a guitarist tend to overlook his roots in Gypsy culture and the musically fertile, polyglot Paris of the 1920’s. Reinhardt and his companions used all these elements, along with American jazz, to create this new music, but the Gypsy heritage seems to be the most important ingredient. Once you hear it you can’t forget it. It is sophisticated, yet it has a sentimental quality. It is Gypsy jazz, and the popularity of this sometimes flamboyant, sometimes melancholy guitar music is growing around the world.

Le Jazz Hot follow in the tradition of Django while expanding the sound. As leader Paul Mehling puts it – “We have a swing or die approach to the music that’s distinctly American. We’re trying to challenge the tendency to slavishly imitate Django’s style, without watering down the gypsy tradition or diluting the music…”