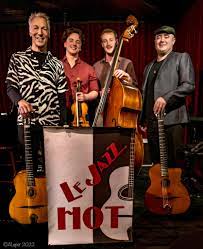 Paul Mehling, the leader of HCSF, Le Jazz Hot, and the Ivory Club Boys, has been dubbed the godfather of American gypsy jazz. He discovered the music of Django Reinhardt and the Quintet of the Hot Club of France in grammar school, and decades later the music that took root in his young soul finally bore fruit.

Critics have noted that the music of Mehling and the HCSF owes as much to 52nd street as gypsy jazz, a characterization Mehling doesn’t dispute. “We have a swing or die approach to the music that’s distinctly American. We’re trying to challenge the tendency to slavishly imitate Django’s style, without watering down the gypsy tradition or diluting the music. We bring out the visceral element of the music that Serge Krief told me is so important. When I talk with gypsy musicians, they say that they love what we do because they can tell we love the music. If people dig our music, when gypsy bands come to America, there will be an audience waiting to hear them.”

Django Reinhardt is rightly hailed as one of the greatest guitar players that ever lived, but many people praising his accomplishments as a guitarist tend to overlook his roots in Gypsy culture and the musically fertile, polyglot Paris of the 1920’s. Reinhardt and his companions used all these elements, along with American jazz, to create this new music, but the Gypsy heritage seems to be the most important ingredient. Once you hear it you can’t forget it. It is sophisticated, yet it has a sentimental quality. It is Gypsy jazz, and the popularity of this sometimes flamboyant, sometimes melancholy guitar music is growing around the world. Aficionados everywhere are forming bands, called Hot Clubs, in honor of Django Reinhardt’s famous Quintet of the Hot Club of France.

There are Hot Clubs in Norway, Tokyo, San Francisco, New York, and probably every country where the guitar is played. It is through the playing of the brilliant Gypsy guitarist Django Reinhardt that most people are introduced to jazz manouche, as they call the style in its birthplace, France.