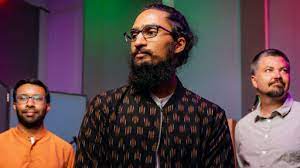 The Alaya Project is the essential bridge between the intricate Carnatic style of Indian classical music and contemporary jazz and funk. Born in the cultural bastion of Oakland, California, The Alaya Project explores new textures and perspectives built over two decades of friendship, dialogue, and musical immersion across genres and continents. The driving hybrid kit grooves of Indian percussionist and drummer, Rohan Krishnamurthy, the soulful Ragas and melodies of Prasant Radhakrishnan on saxophone, and the harmonic bedrock of Colin Hogan embodies the permanence of a changing soundscape.

“Drummer/percussionist/composer Rohan Krishnamurthy is quickly becoming one of the leading interpreters of Indian classical and cross-genre music on the scene today. On August 15, he will release the self-titled debut of his exciting group, The Alaya Project, featuring longtime friends and collaborators Prasant Radhakrishnan and Colin Hogan… Together, they blend the Carnatic tradition of Indian classical music with contemporary styles, such as electric jazz, bebop and funk. In addition, the record features many surprising gems, including a take on The Beatles’ “Being for the Benefit of Mr. Kite” (as a nod to the trio’s genesis) and a tango-flavoured track.”
– JAZZIZ