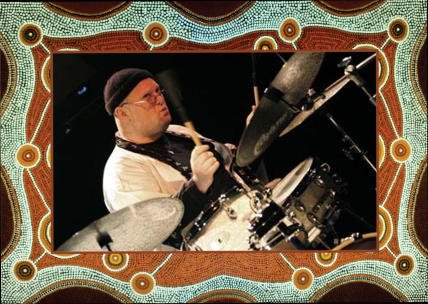 Brian Melvin is an internationally known drummer/percussionist/educator. He has played and recorded with many of the worlds leading musicians. Not limited by styles, he’s worked with the late Joe Henderson, Mike Stern, J ohn Scofield, Michael Brecker, Randy Brecker, Joe Lovano, Bobo Stenson, Toots Thielemans, Richard Bona, Bob Weir (“The Grateful Dead”), Greg Allman (“The Allman Brothers Band”) and many more. One of his main associations has been with the Hall of Fame bassist Jaco Pastorius. They were good friends and made five historic recordings together. One of their most famous was “Standards Zone” (Global Pacific Records,) which was the no. 1 jazz album for 15 weeks. Recently Brian has been involved in many great projects, including Beatlejazz, Fog, and many European projects as well. Also a r esident of Tallinn, Estonia, Brian has been teaching workshops and masterclasses all over E urope as well as playing in numerous musical settings. His most recent projects are Modern Times and Drum Prana from Estonia and FOG from San Francisco. He is very active in world music and has been playing tablas and various hand drums along with electric percussion.

It was back in 1964 when Brian first got the bug for drumming. He and his brother watched the Ed Sullivan show where “The Beatles” appeared for the first time. He could not believe how much fun Ringo was having swinging the group. That Christmas he received a little snare drum with a cymbal attached to it. As his interest grew, his family was very supportive along the way which finally led to a full set of drums.At that same point in history, Haight Street was groovin’ hard in San Francisco and Brian was infatuated with the sound, especially “The Grateful Dead”. There w as something in the air, when they played, that was much different from the other groups, and it was “The Dead” that opened many new doors in the worlds of improvisation. Both drummers of “The Dead” were big influence on Brian.One of his early and most profound influences was the time spent with Jerry Granelli. Jerry was just so different and brought the mystical into the drum. San Francisco was blessed with so many eclectic minds. You had drummers like Jerry, George Marsh, and the late Scott Morris, who also was a very creative and kind in his teachings. Then the likes of Eddie Marshall, and Eddie Moore, Richie Goldberg, and Vince Lateano who were and are just fantastic drummers. It was at the legendary jazz club “The Keystone Korner” where Brian met all the masters. He virtually lived there and became close friends with Elvin Jones, Art Blakey, Philly Joe Jones, Max Roach,and Rashied Ali. Brian and Rashid actually played double drums together with Jaco and Jorma Kaukonen in a short lived group in New York in the mid 80’s. So many others were taken in along the way. He learned brush ideas from Richie Goldberg and Billy Higgens. Also at seven, Brian met Buddy Rich at the classic club “Bimbo’s 365”. That experience totally blew his mind. Buddy was great with children and gave Brian a pair of sticks, his album “Big Swing Face”, a picture and a friendship up until Buddy’s departure.

World drumming has also been big interest of Brian. Master tabla players Alla Rakha and his son Zakir Hussain were his teachers, and remain the most highly regarded masters Brian knows and studies. They turn drums into gold, and watching them together was an experience beyond words.It is a constant inpiration that he will always treasure.Also African Drumming has always captured his imagination, and great friend and drummer Kwaku Daddy shared some of his insights of the African drumming and folklore.