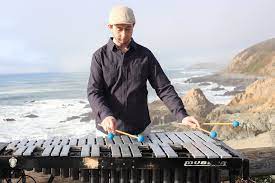 Dan has spearheaded two successful crowdfunding campaigns: One for the release of his debut album Tenerife featuring an all-star ensemble and all original compositions (2017); and the most recent, Cali to Cali: Building a recording studio in Cali, Colombia (2019).

Dan has undergone several trips to Cuba and Colombia, studying music and connecting with musicians worldwide.

Highlights include studying with the Colombian legend Diego Obregón in 2018 and 2020, where he spent an entire year helping build a recording studio, recording various ensembles, writing music and collaborating. Dan was featured on the radio in Guantanamo, Cuba in January of 2019 with his album Tenerife.

Neville studied jazz arranging and improvisation with Bennett Friedman at Santa Rosa JC, studied composition and piano with Rebeca Mauleon at City College of San Francisco, and received a BA in Jazz Music at California Jazz Conservatory in Berkeley, CA. He continues to study the West African balafon with Guinean master and Griot Mohammed Kouyaté.