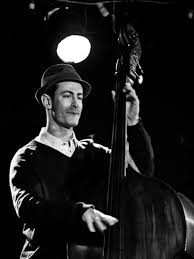 Daniel Fabricant may be the most versatile bassist in San Francisco—and the most in-demand. Playing upright or electric, he can adapt to a wide range of musical settings, from intimate chamber groups to sprawling dance bands and Latin ensembles. In his decade on the San Francisco scene he has played as a sideman with dozens of San Francisco groups and is a founding member of the award-winning Nice Guy Trio.

Fabricant has performed internationally with Piaf! The Show, The California Honeydrops, Michael Feinstein, Liza Minnelli, Betty Buckley, Joan Rivers, Spencer Day, Ann Hampton Callaway, Petula Clark, Dan Hicks and Mary Wilson of the Supremes, among many others. In the Bay Area, he regularly performs with Rupa and the April Fishes, Redwood Tango Ensemble, The Cosmo Alleycats, Lavay Smith and the Red Hot Skillet Lickers and Gaucho, among many others. He has appeared at SFJAZZ, Monterey Jazz Festival, Yerba Buena Gardens, Yoshi’s, The Freight and Salvage, and the Feinstein’s at the Hotel Nikko, and New York City venues including Carnegie Hall, Jazz at Lincoln Center, Café Carlyle and The Algonquin.