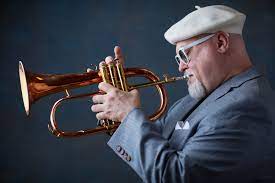 Celebrated for his warm tone, soaring lyricism and masterful technique, American musician Dmitri Matheny has been lauded as “one of the most emotionally expressive improvisers of his generation” (International Review of Music).

First introduced to jazz audiences in the 1990s as the protégé of Art Farmer, Matheny has matured into “one of the jazz world’s most talented horn players” (San Francisco Chronicle).

Born on Christmas Day, 1965 in Nashville,Tennessee, Dmitri was raised in Georgia and Arizona. Attracted to his father’s collection of jazz and classical LP records, Dmitri began piano lessons at age 5, switched to the trumpet at age 9, and took up the flugelhorn at 18.

After private studies with Carmine Caruso in New York City, Matheny became the protégé of the legendary Art Farmer, a formative relationship that lasted over a decade.

Today, Dmitri leads the Dmitri Matheny Group, “an all-star jazz band featuring some of the most accomplished musicians in the western United States” (All About Jazz).

Throughout his professional career as a concert and recording artist, Dmitri Matheny has distinguished himself as a dedicated educator, community leader and advocate for jazz and the arts.