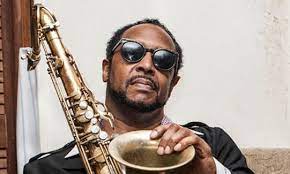 Eric Wyatt is a saxophonist born and raised in Brooklyn, New York. Eric had the privilege of meeting two great jazz masters, both of whom changed his life: Miles Davis and his godfather, Sonny Rollins. Eric recalls, “When I met Miles I was 10 years old and was playing trumpet at the time. He was playing at the Bottom Line, a club in New York, and I never forgot all the energy and joy that this man brought to the audience. Sonny was a friend to the family and stayed connected to us after my father passed.”

Eric has been recording and traveling the world as both leader and sideman and continues to build an impressive, solid resume. Eric has performed internationally in Japan, Shanghai, Hong Kong, Lebanon, Singapore Malaysia, Athens, Thessaloniki Greece, Nice, and Paris, France. He has recorded 5 CDs as a leader: “God Son”, King Records (Japan), “Live at the Half Note”, “The Blue Print”, and “Live at the Brooklyn Paramount”.