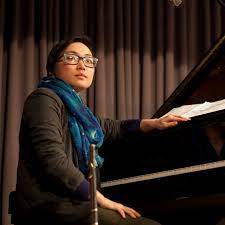 Erika Oba is a composer, pianist/flutist, and educator based in the SF Bay Area. As a composer she has written works for big band, small jazz ensembles, chamber groups, dance and theater. She is active as a performer on both piano and flute, and performs with her own groups the Erika Oba Trio, Ends Meat’ Catastrophe Jazz Ensemble, Rice Kings, and The Sl(e)ight Ensemble. She has also performed with the Hitomi Oba Ensemble, Peter Apfelbaum’s Sparkler, Jason Levis and Lisa Mezzacappa’s Duo B Experimental Band, and many other jazz and experimental bands in the Bay Area. In 2021, she was one of the performers in the premiere performance of Meredith Monk’s Indra’s Net. She has worked as a dance accompanist for Mills College and Berkeley Ballet Theater, and is currently a resident music director with Berkeley Playhouse’s Youth Conservatory Program. In addition to her own private teaching studio, she is a private jazz piano instructor for UC Berkeley’s Music Department.

Past artistic projects include a collaboration with choreographer Sammay Dizon, through the Red Poppy Art House’s inaugural Crossover Residency program in 2016. She was a performer fellow with Giant Steps Music Action Lab in 2017, during which she collaborated with an international group of musicians and recorded the album What If. In 2018, she was a composer fellow with the Gabriela Lena Frank Creative Academy of Music and worked with the Del String Quartet. She was the recipient of a 2019 Civics Art Grant from the City of Berkeley, and collaborated with playwright Weston Scott to write an original musical. As an artist, she is interested in exploring ritual, diasporic identities, and community through performance. She received her BM in Jazz Piano Performance from Oberlin Conservatory and her MA in Music Composition from Mills College.