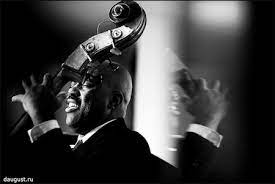 Essiet Okon Essiet first received critical acclaim more than a decade ago as a member of saxophonist Bobby Watson’s post hard bop group Horizon He has long since established himself as one of New York’s premier bassists. His first big break came in 1982 when he met Chicago based percussionist Famoudou Don Moye, a founding member of such important collectives as the Art Ensemble of Chicago and The Leaders. Moye asked Essiet to join his quartet and during that same year the bassist met Abdullah Ibrahim, the famed South African pianist. Working with Ibrahim, Essiet toured the globe splitting his time between Europe and the US during the period from 1982 to 1986. Eventually Essiet settled in NYC. Two years later, he joined Art Blakey and the Jazz Messengers and remained in the group until the famed drummer/teacher’s passing in 1990. During the next decade, the bassist began what has proven to be a significant freelance career.