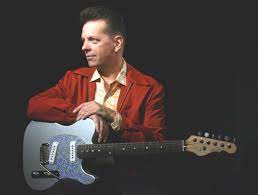 Jinx Jones has been twice nominated for Male Rockabilly Artist of the Year by the Ameripolitan Music Awards, has received gold and platinum record awards for his work with R&B divas, En Vogue, has won songwriting awards and has been recognized as one of the hottest acts on the San Francisco music scene.

In Jinx Jones’ impressive musical career he has visited nearly every conceivable style and genre of the electric guitar. From his work Chuck Berry, Solomon Burke, and Roy Buchanan to his own acclaimed rockabilly albums, “License to Twang,” “Rumble & Twang,” “Rip and Run,” Live Twang in Finland.” And “Twang-Tastic!,” Jones has always strived to expand the possibilities of the instrument. He accepts every musical challenge head on, always making an impressive statement with his music. The one thing that remains consistent throughout Jones’ multi-stylistic journey is the grace and finesse of his virtuoso playing.