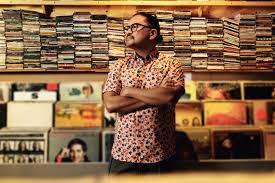 First-generation Filipino-American Jon Irabagon (b. 1978, Chicago) has been influenced by the self-empowering and individualistic philosophies and aesthetic of the great AACM (Association for the Advancement of Creative Musicians) ensembles as well as the historic world-class tenor saxophone lineage from his hometown. Equally adept at composing for rising stars in new music and the most intricate modern jazz ensemble, Irabagon builds on this foundation by adding modern classical and late-period John Coltrane to his compositional base, focusing primarily on mixed chamber ensembles to take advantage of hand-chosen musicians’ voices and attitudes.

After earning a Bachelor of Music from DePaul University, Irabagon continued his education by earning a Master of Arts from the Manhattan School of Music and completing post-graduate studies in the jazz program at Juilliard, where he received an Artist Diploma. However, Irabagon’s accomplishments do not end with his education. Irabagon was also the winner of the 2008 Thelonious Monk Saxophone Competition, winner of the Rising Star award in Downbeat Magazine for both alto and tenor saxophones, and the recipient of a Philippine Presidential Award, the highest civilian honor an overseas Filipino can receive in commemoration for their contributions to the perception of Filipinos worldwide.

As a member of a minority community who fights  against the countless times his voice has been marginalized, Irabagon’s compositions rely on open dialogues with his fellow performers to create a gateway for communication and understanding. This interaction of notated material and strong improvisatory character is essential to Irabagon’s musical vision. As music reporter Nate Chinen notes in his Top Performances of 2015 article, Irabagon’s compositions “are drawn to the play of opposing forces, especially those involving abstraction of form.”

Named one of New York City’s 25 Jazz Icons by Time Out New York, Irabagon composes for his ensemble Outright!, which received a 5-star Masterpiece review in Downbeat Magazine for Unhinged (2014), as well as the Jon Irabagon Trio, featuring Barry Altschul and Mark Helias, and his new quartet with Matt Mitchell, Chris Lightcap and Dan Weiss. Irabagon has been an integral part of ensembles such as the Dave Douglas Quintet, the Mary Halvorson Quintet, Septet and Octet, Barry Altschul’s 3Dom Factor, Ralph Alessi’s This Against That, Mostly Other People do the Killing and Uri Caine’s Catbird.

Irabagon has been an ensemble and private lesson instructor for all levels at several institutions in the New York City area, including with Jazz at Lincoln Center’s Middle School Jazz Academy, as well as giving saxophone, improvisation, and composition masterclasses on four continents.

Irabagon currently runs his own imprint, Irabbagast Records, to release his own uncategorizable works as well as other cutting-edge, creative artists.