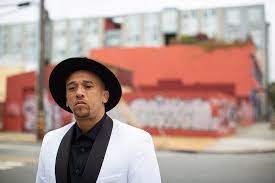 Pianist. Emcee. Producer. Bandleader. Sideman. Music historian. Kev Choice wears many hats, and all of them fit. Blessed with prodigious talent, plus the skill and dedication to his craft to pull it off, the Oakland-based artist is redefining what it means to be a musician in this day and age. Not too many classically-trained pianists who hold Master’s degrees in jazz can rock microphones with blazing-hot 16s.

Yet such versatility comes natural to Choice, whose diverse array of influences ranges from Prince to Rakim to A Tribe Called Quest to Stevie Wonder to McCoy Tyner to Chopin and Ravel.

“I grew up in the Hip-Hop era,” he explains. “I had love for Hip-Hop before I even knew what classical music really was.” Hip-Hop, he says, “was always the music that helped me express myself the most,” while “Classical music gave me a broader understanding and appreciation for music beyond Hip-Hop.”

As a solo artist, he’s opened for Robert Glasper, Mos Def, Digable Planets, DJ Quik, and J Davey. He leads a jazz-hip-hop-funk big band, the Kev Choice Ensemble, in addition to producing and performing his own material, which includes original jazz and classical compositions as well as classical- , jazz-, and funk-inspired hip-hop.

Performing live, he says, is “a way to take people on a journey. I want people to feel highs and lows, experience emotions, and relate to the things I’m saying in the music. I want people to see the amazing musicians in my band play at a high level and have us touch them with our musical gifts individually as well as collectively. I definitely always look to reflect my diverse musical influences in a show. I try to combine classical, jazz, soul, funk, rock, drum & bass, electro, and all types of music, in a Hip-Hop context. I like to stay current with my show, constantly adding new elements, trying new things, and trying to take it to a higher level.”

Macy Blackman and the Mighty Fines
Scroll to top