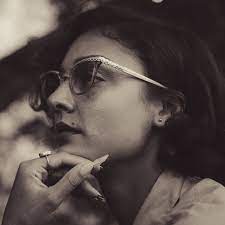 Mara Hruby doesn’t just play music—she lives it. Since the onset of her career, the Oakland, CA native has poured her soul into her velvet confections, drawing inspiration from lessons that she’s gleaned in her personal life and funneling them into rich, organic compositions. In just a few years, the singer-songwriter has become one of acoustic soul’s fastest-rising up-and-comers, gaining a loyal following.

With influences such as Julie London and Patsy Cline to The Moonglows, Curtis Mayfield and Brook Benton, singer/songwriter Mara Hruby personifies the sound and soul of an alternative jazz legend. Her debut EP released in 2010 conceptually titled From Her Eyes featured Ms. Hruby soulfully covering classics originally performed by men. Ranging from the likes of Jamiroquai, Bob Marley and D’Angelo, she would re-interpret their work while adding her own feminine touch. Marking over 80K+ downloads the project propelled Ms. Hruby into her own lane, scoring thousands of loyal fans and supporters. A captivating performer, Ms. Hruby has notably sold out shows at Yoshi’s Oakland and Blue Note Jazz Club in NYC. She has also performed in venues stretching from Philadelphia, DC, to Grammy Weekend (2012 & 2016) in Los Angeles, the 28th Annual Long Beach Jazz Festival (2015), The Clift Hotel’s Centennial Celebration (2015) in San Francisco and the 75th Annual Stern Grove Festival in San Francisco (2012).
Ms. Hruby’s most recent work, titled Archaic Rapture released in 2014 and received a nod of approval from Billboard. Billboard premiered her first single “Cry Me A River” by way of a live studio performance. Filled with her power, emotion and depth shine vividly, the video gives the audience a small glimpse into the full EP. Ms. Hruby’s Archaic Rapture may be briefly defined by her heartbreak, but it bleeds deeper down into the details. Her Sophomore EP overflows with pure emotion not to convey weakness, but to show strength in being honest with oneself. Within the first week of its release Archaic Rapture reached the coveted #1 spot on iTunes Jazz charts.
You will come to understand, fairly quickly, that Ms. Hruby exudes pure creative power and sentimental care through her body of work. It’s only a matter of time before her art receives international acclaim on a large scale.

“Mara Hruby is bridging the gap between cabaret-era jazz-pop and and alternative soul.” – NBC Bay Area

“…she enchantingly (and with ease) recalls raw emotions back to you, paralleling Norah Jones and Amel Larrieux.” – Vibe Vixen

“…her effortless sound evokes a nostalgia for the sounds of Billie Holiday and Ella Fitzgerald.” – Huffington Post