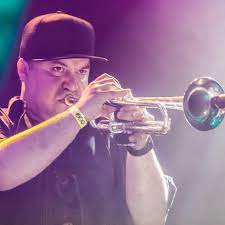 Mike Olmos has become one the most in demand jazz musicians in the San Francisco Bay Area while maintaining a frequent national and international performance/touring schedule. In the Bay, Mike has been performing with various bands such as the Marcus Shelby Jazz Orchestra, Lavay Smith and her Red Hot Skillet Lickers, Pete Escovedo, Wil Blades, Eddie Roberts, Jubu and Legally Blynd. ​

Mike grew up living between the central valley of California and Los Angeles. Born into a family with deep musical and performing arts roots he was exposed to music at a young age, little did they know what lasting effects this would have on him. He followed the path of so many young children learning to play trumpet in the school band. With guidance from an incredible band director, a deep connection to music and an innate talent for performance that speaks to others, Mike starting getting high level recognition, winning soloist competitions, scholarships and praise from noted professionals within the jazz community.

While in college Mike’s talent did not go unnoticed, he was given the incredible opportunity to go on tour with Rosemary Clooney. It was from this pivotal moment that it became clear that he had found his calling. Following the tour he then moved to the bay area and has never looked back. He has been blessed and honored to do what he loves while playing with a wide range of groups and legends from all genres.