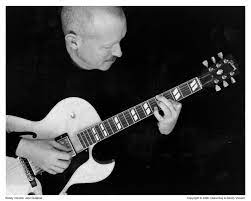 Randy Vincent began his career in Florida and moved to the San Francisco Area in 1980. Since then, he has divided his time between performing and teaching. Among the many musicians with whom he has performed and recorded are: Joe Henderson, Dizzy Gillespie, and Bobby Hutcherson.  He plays on a regular basis with many local musicians throughout the San Francisco Bay Area

Randy has taught jazz guitar at Sonoma State University (in Sonoma County, California) since 1981 and also taught at California Jazz Conservatory and currently teaches at San Francisco Conservatory of Music. and has conducted clinics throughout the U.S. While on tour with Joe Henderson, he taught at Taller de Musicos in Madrid, Spain. Randy’s students include Julian Lage, the young prodigy who appeared on the 2000 Grammy Awards show. Julian has toured worldwide with the Gary Burton Quartet, and is featured with Gary on his most recent two recordings. Randy has also taught Dave McNab, who has worked with Shelby Lynne and has appeared on The Tonight Show with Jay Leno and Late Night with David Letterman; and Liberty Ellman, who works on a regular basis with Greg Osby and Henry Threadgill.