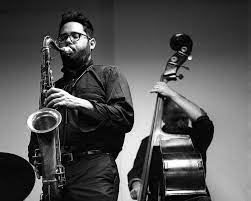 Drummer/Vibraphonist/Saxophonist Smith Dobson V has been performing in the Bay Area for nearly twenty years. Originally from Santa Cruz, Ca., Dobson is a member of an important Jazz family. His father, the late Smith Dobson IV, was a world renown Pianist and director of the Jazz series at the Garden City in San Jose for over twenty years, where he accompanied artists’ like Art Pepper, Stan Getz, Bobby Hutcherson, Harold Land, Chet Baker, Red Norvo, Tal Farlow, and Lee Konitz, to name a few.

Also in the family, Grandfather Smith III is a Jazz Accordionist, Grandmother Norma, Mother Gail, and Sister Sasha are all Jazz Vocalists. The family often performed as a group at the Garden City, and other venues, as well as many local schools and workshops. As a child, Smith V had the opportunity to study with legendary Jazz Drummer Albert “Tootie” Heath, who said of his pupil, “He has the talent, determination and persistence as a musician, combined with the dedication necessary to succeed… improvisational skills totally advanced, excellent sensitivity, both solo and as an accompanist… my most talented student!”

The Pit Orchestra with Bob Sheppard
Scroll to top