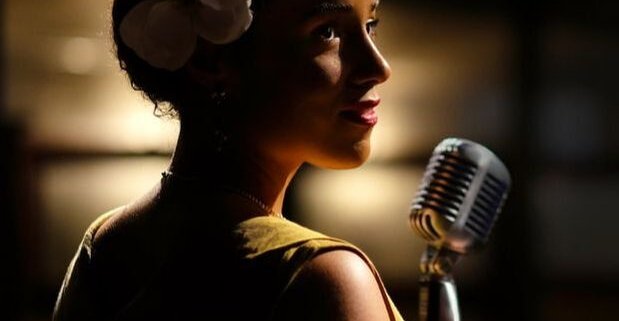 Stella was just a tiny girl when the gift for song found her. Rooms full of folks suddenly stilled and leaned in. With a cupful of classical training, a salt pinch of musical theater, a bouquet garni of many-colored jazz stirred in, Stella stepped up, love of music her birthright. Every instrument in a Louis Armstrong album was Stella’s, to vocalize and riff to.

At Interlochen Arts Academy and Syracuse University, and in theaters across the globe, Stella enriched her work with plays, from Shakespeare to Mamet. Stella has a deep love of storytelling, every song a story, new and old.

Sending down roots in New York City, branching out in roles across the country (both plays and musicals), Stella’s career in theater began to bend increasingly toward music. She began singing weekly with the one&only Marjorie Eliot and her phenomenal Parlor Jazz Entertainment. She also began putting together her own musical projects: Accordion/Voice Duo, parks, cafés and clubs, Constellation Jazz Band, The Artisans with Paul Nieto (pop, soul, eclectic folk fusion), harmony vocals on Jody Shelton originals, and recording collaborations with songwriter Sam Godin.

Now at home in the San Francisco North Bay once again, Stella hits the home-turf singing, stepping into rich collaborations, with circles of great artists, bands, and musicians of the Bay Area