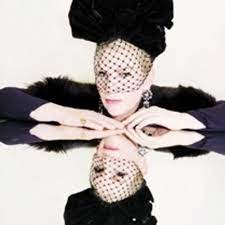 Veronica Klaus grew up in Gillespie IL, home of Black Diamond Days, the original festival of coal—population 3200—in a large middle class family, the youngest of 5 children. Her stepmother taught school, her father a manager at a grain elevator, and later a milkman. She spent most of her spare time at the church alone teaching herself to play piano and sing. Life would change with discovery of Bette Midler’s first album in the small public library, giving her a glimpse of something beyond her small town existence.

She graduated from U. of Illinois, with a degree in Music Education. There she began to search out recordings of jazz and blues artists such as Etta James, Etta Jones, Aretha Franklin, Jimmy Scott, Billy Holliday, Bettye Lavette, Dinah Washington, Ruth Brown, Varetta Dillard, Julia Lee, Martha Davis, and Nellie Lucher in the record stores, soaking up performances by legendary blues singer Koko Taylor at the Student Union, and attending the original Farm Aid Concert while being taught by renowned opera singer and professor William Warfield.

She moved to San Francisco in 1986 after school and began singing in clubs in 1989. In 1993 she began forming her Heart and Soul Revue – a 12-piece big band with horn section and background singers and shifting focus a bit to old-school soul, funk and blues. She performed material from Ike & Tina Turner, Big Maybelle, Bill Withers, and Gladys Knight, garnering fans and a won awards including the SF Weekly’s Whammie Award in 1995 for “Best Blues/R&B,” and a Cable Car Award for “Best Entertainer.”

Veronica has played many, many venues in SF over the years .She was a staple in the early scene at clubs including Café Du Nord, Club 181, The Elbow Room and has performed at the Fillmore, and Slim’s, – once opening for the renowned Ohio Players!

She has worked with and performed for many charity and non-profit agencies over the years including Transgender Law Center and Rainbow World Fund, AIDS fundraising, benefits for progressive politicians and Marriage Equality.

Initially wanting her music to speak for itself, Veronica didn’t – aside from a knowing glance, a wink or double entendre—make her gender change a focus on stage, finding that her experience was usually reduced to a label like “transgendered singer.” However, with co-writer and director Jeffrey Hartgraves, Veronica found the opportunity to take her time to tell the story right and in her own words, writing Family Jewels – The Making of Veronica Klaus a full-length theatrical one-woman show with stories and songs, some original, elaborating with humor, poignancy and insight on her life, growing up, transition, becoming an artist with its romance and heartbreak – an “everything you always wanted to know about Veronica, but were afraid to ask” tour-de-force. It ran for three successive 6-week runs at The Exit Theater and Theater Rhinoceros and got rave reviews from audiences and critics.

Veronica played a 2-year residency on Tues. nights at the legendary North Beach club Enrico’s in 2009 and 2010.

After that engagement at Enrico’s, Veronica played regularly at The Rrazz Room in SF where she enjoyed large, enthusiastic crowds, especially for her acclaimed Peggy Lee songbook shows Lee a La V. In 2013, the Peggy Lee tribute show was a hit in NYC at Joe’s Pub at the Public Theater with special guest, Joey Arias. In 2014, she released the recording Lee a La V to great reviews! In 2016, Veronica made a bold decision and, after 30 years in SF, purchased an 1850s Greek Revival Lutheran Church in Sharon, NY and has been refurbishing it for her home and eventually a small bed and breakfast. Adjoining Sharon Springs NY, well-known upstate as a haven for progressives and also as the home of the Beekman 1802 company, has welcomed her enthusiastically! She has produced concerts in her new home, as well as being involved in the local effort to renovate a 19th century Masonic Hall as the new Klinkhart Arts Center.

In 2018, Veronica began what she hopes will be an annual return to SF for concerts and reunion with her friends and fans.